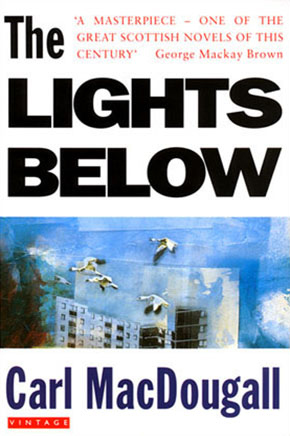 "A young man, Andy Paterson, has just been released from prison on a drugs charge of which he is innocent; he wants to know why he was framed and by whom."

"Glasgow has changed a lot since he was put away; he has to attune himself to the new rhythms, a painful business. He isn't a tough guy - in fact he is an intelligent young man with a love of books and music... The novel is as much a celebratory portrait of modern Glasgow as of Andy Paterson." "It is a beautifully constructed story throughout. Glasgow has a major new novelist in Carl MacDougall, no doubt about it." GEORGE MACKAY BROWN, 1993. "The Lights Below is a model of stealth. MacDougall builds his story, layer upon layer, surreptitiously towards a deft and utterly plausible resolution. It's focus is Andy; its locus Glasgow. The city's presence is alive; MacDougall deploys it as more than the setting for Andy's search. It lives in the memory of his book. It serves as a symbol of continuity and change, presenting persuasively both the comforts and disaffections human beings serve on each other. " SCOTLAND ON SUNDAY, 1993. "A masterpiece ... one of the great Scottish novels of this century." SPECTATOR.

"Carl MacDougall's real subject is Scotland and what it means to be Scots... "

"Angus MacPhail is the child of failure ... While his adoptive brother tries to save Scotland for socialism by robbing banks, Angus, representing the bastard majority, is happier working for number one. Not that he is happy. Having alienated a succession of women by his dour self absorption, he finally ends up in a cosily incestuous relationship with his adoptive sister ... Despite its lightness of touch, this is a novel of complexity and ambition, hilarious, moving and thought provoking". "This novel ... sets Carl MacDougall firmly among the pantheon of Kelman and Gray ... sparkling and exhilarating ... wise and, above all, entertaining". SCOTLAND ON SUNDAY. 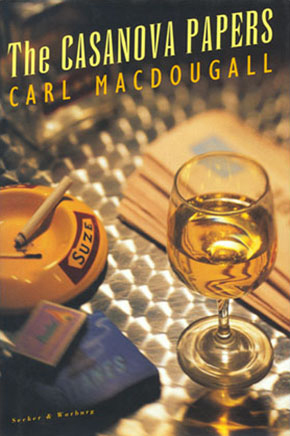 From a converted church overlooking Glasgow, a former political correspondent watches the planes come and go, staring towards the countryside beyond the city while taking stock.

Beginning with the death of his wife, he gradually moves across their life together, between locations, snatching common memories, filling the past with details his children could never have known. At the same time, he is forced to concentrate on his own, immediate concerns; his loss of job, lack of friends, loneliness and crumbling attempts to fill his time. In Paris, on an unimportant newspaper assignment, he finds what he thinks is another beginning. The Casanova Papers are contemporary accounts, from a variety of sources, sightings, memories and opinions, of Giacomo Casanova de Signault, courtier, gambler, spy and writer - the man who gave his reputation to posterity, who struggled with his past and reconstructed his life into the way he wanted it to be remembered. As the narrative moves across time and location, what is the significance of these papers and what echoes do they contain? The Casanova Papers was shortlisted for both the McVitie and the Saltire awards.